Hi, thank you for inviting me to your blog to talk about my latest book from Evernight.
An Unusual Vacation
I originally expected this story to be a short, but as the plot developed and the characters took over, the story grew and grew, and still there’s more to tell, because one of the supporting characters, Connor, is going to have his own story.
Dominic Carr, my hero and Michelle Vega, my heroine, couldn’t be more different, but they are instantly drawn to each other and the resulting passion between them is intense. Dominic’s hopes are high, making him vulnerable. Michelle is involved in a dangerous lifestyle far removed from Dominic’s, but she’s lonely. This opens her up to taking chances when she meets Dominic.
I love water, rivers, and the ocean. They have their own very special atmosphere, and I wanted to flavor the story setting with the sounds, and smells of sun drenched harbor towns, wide rivers and boats, to provide contrast with the suspense element of the story.
When you read the story and Dominic sails away on vacation. Think Monterey or the marinas in the Caribbean or the Florida keys. The sky is Grecian blue, the air and water sparkles. There’s the smell of salt and sea, and wheel of seagulls as the couple walk on the quay together. 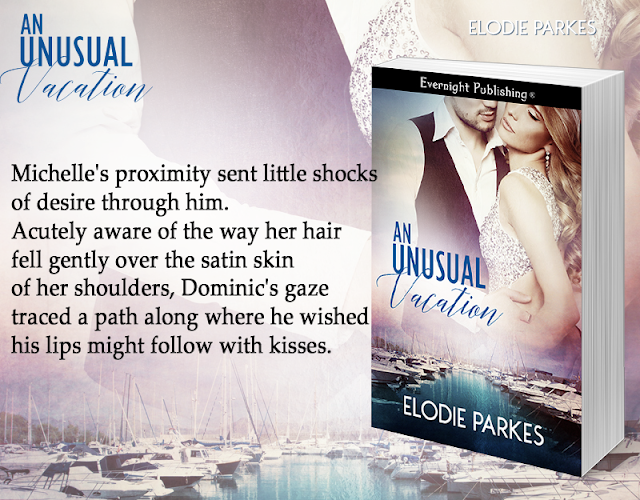 At thirty-two Dominic Carr thinks it’s time he met a girl he could love. He’s tired and jaded from his high power job, and hoping that this summer’s vacation will be refreshing. When he sees Michelle Vega in the art gallery of a harbor town he visits, her long legs in pink couture shorts grab his attention.
Michelle Vega has everything to hide except her beauty and her instant attraction to Dominic. She’s not on vacation as she visits the gallery—more like on business.
As the two of them fall into a hot romance, Dominic is sure Michelle could be ‘the one,’ but Michelle is filled with doubt when she considers how he might react to discovering her secrets.
When Michelle’s business takes a dangerous twist Dominic finds he’s pulled into a perilous situation.
Will this be a test of his love or the finish of it?

Read an excerpt: Dominic sees Michelle for the first time
A sunbeam slanted through the skylight as if aiming for Dominic’s face. He opened his eyes and rolled away from the bright shaft of light. His head safely on the other side of the pillow, Dominic checked the time on his cell phone that lay on the bedside unit. The day looked beautiful through the cabin window as he sat up and swung his legs onto the floor. He pulled on a T-shirt over his boxers and padded into the galley to make coffee. Dominic went up on deck and took his cup of coffee with him. The clear, blue sky and the sun-dappled water brought a smile to his face. The marina around his berth was already full of life, and he sat to watch a fabulous motor yacht edge out of a berth and move majestically into deeper water. Hunger drove him to shower and dress. He had food in the fridge to cook, but Dominic knew there was a great café in this town next to an art gallery and he meant to visit both that morning.
Mellowed by the blueberry pancakes he’d eaten, the sun on his shoulders as he sat at one of the café’s outdoor tables lifted his spirits. Summer scented the air and Dominic took a deep breath. I needed this change. It feels as if I’ve suddenly entered the real world…
His thoughts made him grin as he paid the bill, and left the café. The art gallery, a door down, was showing several local artists’ work and the traveling exhibition on loan from a private collector housed a number of Monet paintings Dominic wanted to see. He’d never thought about joining the art world himself, but Dominic liked to look. It gave him a sense of peace.
A poster on the revolving door proclaimed there was a small fee that week because of the Monets. The gallery had two floors. The rooms were long, stretching back in the deceptively spacious building, with padded benches placed at intervals for people to sit and absorb the art. Dominic donated at the plastic box attached to the screen midway down the first floor of the gallery designating the entrance to the special exhibition. He wanted to see that first.
Over an hour later, Dominic left the Monet exhibition, and wandered along to the top room of the art gallery. He saw the young woman the moment he reached the top of the stairs. She sat part way down the left hand side, on one of the blue benches. Dominic couldn’t tear his gaze away as he edged closer to where she sat. She wore a pale-pink suit jacket and her glossy hair fell down her back, almost to her waist. Her lightly tanned legs were bare and she wore bright pink, high-heeled pumps. Dominic couldn’t see a skirt. Intrigued, he stopped at the painting adjacent to the one she sat in front of, and cast a secret glance at her. Shorts, mmm, she’s beautiful. He passed behind the bench trying to ascertain if she wore a wedding ring. Luck gave him a perfect opportunity as she moved her hair from her face, giving him a delightful view of a naked wedding band finger and her lovely profile. Dominic’s heart raced. Surprise at his reaction to the young woman gripped him, and he walked rapidly across the width of the gallery to stand before an ocean scene and try to collect his swirling thoughts.
Copyright Elodie Parkes 2015 Evernight Publishing 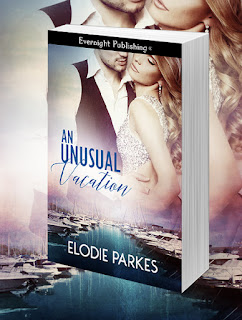 Buy the book: Evernight  All Romance  Amazon US  Amazon UK  Siren Bookstrand
About Elodie
I’m a writer who is in love with happy endings. Currently based in the UK but thinking about joining the next flock of birds I see heading south for the winter.
I love: music, art, flowers, trees, the ocean ...
I work with antiques by day and words by night.
Like a vampire, darkness is my friend, that’s when the silence is only broken by an occasional hoot of owls in the woodlands opposite my current home, and I write.
Find Elodie online: Blog  Facebook  FB  Twitter  Tsu  Google +  G+  Pinterest  Blog 2  Tumblr  ManicReaders  Amazon