Hi, thank you for inviting me to your lovely blog today with The Venn Pack in Love.

The Venn Pack in love started with, Surprising the Alpha, originally written for an anthology, but then ultimately developed into a full-length story, and the first in ‘The Venn Pack in Love’ series.
All the heroes are the sexy alpha types, but vulnerable, and hoping for love. Their heroines are feisty, and once the wolf shifter bond is formed, crave their mate as much as he adores them. It’s very steamy, but all the same, the plots are complex and a mix of sub-genre, mystery, suspense, erotic romance, paranormal romance, and adventure.
I wanted this wolf-shifter pack to be different and have none of the sometimes hackneyed
wolf-lore found in this type of story. 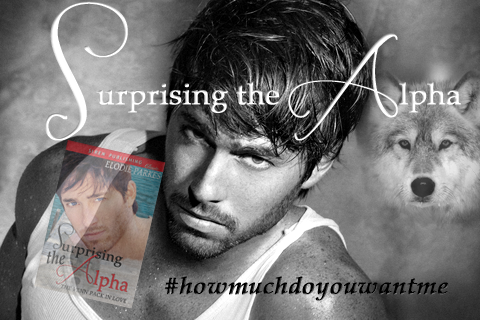 Surprising the Alpha, The Venn Pack in Love
The town is dying after a new highway takes its previous through traffic and custom away from shops, cafes, the bars and tourist attractions. The Venn wolf-shifter pack and alpha, Joshua Venn, are suffering. They’ve lived happily in the town as humans and like it, but now they’re threatened with slinking back to a woodland den with their tails between their legs.
One day Dani Cruz and her brother Jason hit town. They’re entrepreneurs whose business is urban regeneration and they intend to save this town. Only one person resents their arrival, alpha wolf-shifter Joshua. Will his determination to be the only one who saves his pack drive the town to ruin? Or will something happen that changes his life forever?
Joshua Venn is looking for answers. It’s one hot summer and someone hides a secret.
This alpha is in for more than one surprise.
http://www.amazon.com/Surprising-Alpha-Siren-Publishing-Classic-ebook/dp/B0153O6JFC
http://www.amazon.co.uk/Surprising-Alpha-Siren-Publishing-Classic-ebook/dp/B0153O6JFC
http://www.bookstrand.com/surprising-the-alpha
4 twinkling stars from Readers' favorite
“The story was well-written and full of details. I enjoyed the plot and its resolution to the story......Dani is a surprising heroine. She is smart and determined. The two (Joshua and her) have an intense chemistry that is fun to read about It had some unexpected twists that held me captivated.” 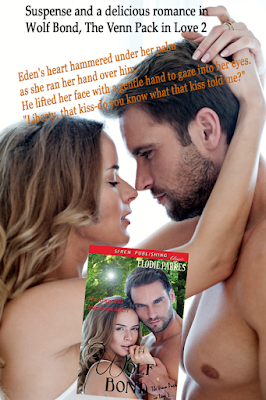 http://www.bookstrand.com/book/wolf-bond
Liberty Venn longs for love after her alpha brother, Joshua, found it with Dani Cruz. It’s a year after the Cruz entrepreneurs have regenerated the town and saved Liberty from closing her cafe.
When a stranger arrives in town, he instantly captures lonely Liberty’s attention. Drawn to him by a deep undeniable instinct, Liberty loses her heart when Eden Farrell flirts with her.
Will he be the lover she’s begun to long for?
Eden Farrell, PI, wolf shifter, gorgeous, goes after what he wants, and now he wants Liberty. He recognizes the wolf in her long before she knows what he is. He ignites a passion in Liberty and she delights him with her response.
As a deep bond forms between them, danger follows Eden. He’s in love with Liberty, and believes nothing will keep him from her. Trouble is; danger is out to find them both. 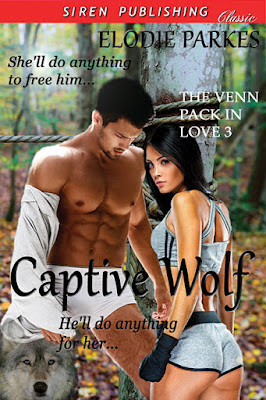 When Ryder Venn sets out to do a favor for his alpha brother, Joshua, he thinks it’s just an ordinary day. Little does he know the horror and adventure that awaits him. Captured and tortured by shifter hunters, Ryder wakes to the gentle care of Evie Thomas.
As Ryder Venn falls in love with the mysterious girl who nurses his wounds and feeds him, Evie discloses her reason for being part of the hunter’s group. She’s infiltrated the club, determined to avenge her brother’s death at one of their leader’s hands. As Evie reveals her identity and plans to Ryder, they fall into a heated and passionate love affair. Meanwhile, the shifter hunters plot to force Ryder into cage fighting. The trouble is just who or what will they make him fight?
Deep in love, Ryder marks Evie as his mate.
Gorgeous Ryder will do anything for her.
Lovely Evie will do anything to free him. 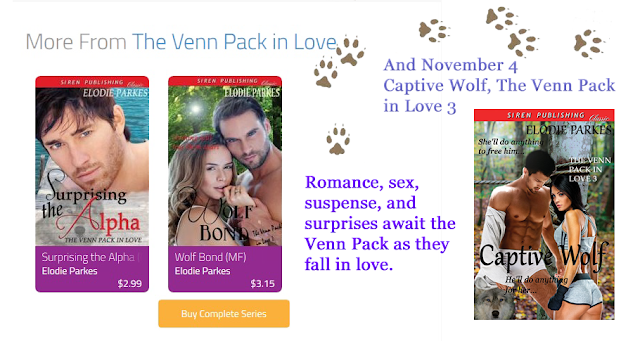 Enjoy these snippets from The Venn Pack in Love series:
Surprising the Alpha, The Venn Pack in Love
He approached slowly. “The river is hard to resist. I swim here sometimes.” About a pace away his breath left him when his gaze alighted on the V between her legs where her thighs met as she sat on the end of the jetty. The breeze had picked up the end of her shirt, blowing it back to display the black silk panties she wore. They stopped way below her hips and an expanse of creamy skin greeted his hungry gaze. He couldn’t tear his eyes from the enticing sight. Her voice reached him through a fog of lust.
“You live in town then?”
Joshua raised his eyes to her face. She showed no signs of knowing he stared at her body, or of worry that she showed off her panties. Well, if she were swimming, she’d be wearing a bikini, so I guess I’d be ogling the same kind of view. He smiled at his thought and her, a flood of some warm emotion mellowing his previous bad temper. He drank in the sight of her, her huge golden-green eyes, pert button nose, those luscious lips, the endearing sprinkle of freckles across her cheeks, and the silky tendrils of hair caressing her lovely neck. He’d never felt anything like the rush of intense desire and tenderness that forced him to squat beside her. “I do live here. I was born here.” His cock was hardening and the squat helped him disguise the bulge in his jeans. A sigh rose in his throat. His wolf nature knelt before her. How good would it be to kiss her? How would it feel to sink my cock in her pussy? She’s so lovely. Lovely wasn’t a word Joshua used too much in his life, but now lovely echoed in his brain all the time. He quickly licked his suddenly dry lips. “I’ve not seen you before. Are you a tourist?” Lovely one, he added in his mind.
©Elodie Parkes 2015 Siren Publishing

Wolf Bond, The Venn Pack in Love, 2
Joshua gazed at him. “You’re used to this shit, aren’t you? So much for not bringing danger. I have half a mind to run you out of town after this and tell Liberty you’ve left her. She’ll get over you. She’s strong.”
Eden felt his stomach tighten with anger. His eyes burned, and he knew the glow was back. He glared at Joshua. “The hell you will. Liberty and I have a bond, a wolf bond, and you fucking know what that means. I can’t live without her and she’ll pine for me. How about you try living without Dani? How’d you feel about that?”
Joshua looked away. He sighed. “Is this your fault?”
Eden rubbed his forehead. “I don’t think so. I honestly believe this was some weird coincidence. Let’s do this. First the rental and then the other stuff.”
Joshua shook his head. “I’ll get Lucas out here. We need to deal with all the vehicles at once.”
Eden sighed heavily. “How long will that take? No, we can do this. Do you know a cliff top or not?”
©Elodie Parkes 2015 Siren Publishing

Captive Wolf , The Venn Pack in Love 3
Evie freed her hands from his and ran her fingertips up his chest. She caressed his jaw.
“Do you want dinner now or after I make love to you?”
Ryder’s eyes widened at her. “Here? Can anyone see us?”
Evie smiled. “Ah, so if no one can see us you’d like that?” She’d worn her hair loose, and it fell down over her shoulder in dark waves.
Ryder reached out and wound a length around his hand. He brushed her breast with his fingertips and her nipple peaked through her fine cotton T-shirt. He flicked his gaze to hers and traced her nipple with his thumb.
Evie’s body went into melt down. She closed her eyes and sighed with pleasure, trailing her fingertips carefully down Ryder’s body. She wanted to make love to him, but not hurt him.
Evie moved the quilt and opened her eyes to see what she’d revealed. She ran her tongue over her lips and traced the shape of his erection, over the head and down the rock-hard column with a trembling fingertip. She bent and kissed Ryder’s lips.
Ryder murmured against her mouth, “Evie, this feels so good. I want you so badly.”
She sat up and pulled off her T-shirt. Her breasts pushed out, the nipples hard and she brought his hands to hold them.
“I want you, too.” Her voice reduced to a whisper, she grasped his cock as he gently kneaded her breasts. Evie savored the feel of him, and acutely aware of the torture he’d endured, she softened her touch as her fingertips reached his balls.
Ryder opened her jeans and Evie stood to let him push them down her thighs.
She took them off and stood before him in her panties. A tremble went through her. The desire welling up inside her was so strong her clit buzzed and her pussy throbbed. She could hardly wait to feel him inside her.
He took a deep breath. “You are lovely,” he whispered. He leaned to her and kissed along her stomach and hips, his hands gentle on the sides of her body.
Evie drifted in the pleasure of his touch. Her stomach tightened under his lips. She angled her hips to him wanting, needing his fingers inside her. Her pussy clenched and cream drenched her panties.
Ryder made a soft sound and plunged a hand down inside them. “I can sense your need. Your scent’s beguiling.” He ran a finger around her folds, and then he pushed two cream-coated fingers into her. “Fucking hell, you feel like heaven.” He nuzzled her breasts as he fingered her, making low sexy sounds that sent tingles racing over every inch of Evie’s body.
©Elodie Parkes 2015 Siren Publishing

About Elodie
I’m a writer who is in love with happy endings. Currently based in the UK but thinking about joining the next flock of birds I see heading south for the winter.
I love: music, art, flowers, trees, the ocean...
I work with antiques by day and words by night.
Like a vampire, darkness is my friend, that’s when the silence is only broken by an occasional hoot of owls in the woodlands opposite my current home, and I write.
Find me:
Blog  Facebook  FB2  Twitter  Tsu  Tumblr  ManicReaders