DC Stone is visiting me today. She recently released her second book in her Empire Blue series, Intimate Fear. I'll let her tell you all about it.


A message from DC:
I’m super excited to bring you all the second book in my romantic suspense series, INTIMATE FEAR. Many met Dwayne, my hero in this story, in book one, INTIMATE DANGER, who is Charlie’s best friend. Dwayne is known for his quirky, yet professional ways, and as the town’s playboy, so I had so much fun bringing him to a level that knocked him on his ass! I hope you all like him, too, and please make sure to let me know your thoughts! 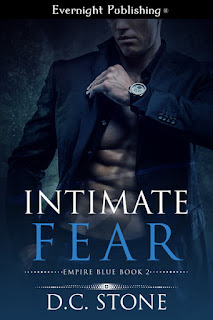 Dwayne Gonzalez has always had a thing for the beautiful Brooke Mason, but she married another man, had his child, and started her life without him. Now, years and a divorce later, he’s still on the sidelines, yet in Brooke’s and her daughter, Hailey’s life, but not in the way he wants.
A drug investigation brings Dwayne on the front step of Brooke’s life. With his attention distracted, Hailey is kidnapped and engulfed in a human trafficking ring. Dwayne marches in and toes the line between the right side of the law, and in it, pursues his heart’s desire.
Evernight: http://ow.ly/OvN84
Amazon: http://amzn.to/1IorthL
Amazon UK: http://amzn.to/1K1IKSp
Amazon CA: http://amzn.to/1FqQmHz
About DC:
D.C. “Desi” Stone is a best-selling romance author and full-time fraud investigator. She lives in the northeast with her incredibly supporting husband, two kids, and the ever-growing family of cats.
After serving eight years of service with the United States Air Force, she went on to transition into the world of financial crimes and became a lead investigator for many years.
Reading has always been a passion of hers, getting lost in a good, steamy romance is one of her favorite past times. She soon after discovered her own love for writing and recreating stories and characters in her head. Her writing concentrates on romantic with specifics in paranormal, suspense, and erotica.
Now, when she isn’t trying to solve a new puzzle in the world of fraud, she is engulfed with coffee, her laptop, and all those crazy characters in her head. She is a member of the Romance Writers of America, Hudson Valley Romance Writers, New Jersey Romance Writers, RomVets, RWA Kiss of Death, and the Liberty State Fiction Writers. She served as the 2014 NJRW Vice President and Conference Chair. Come stop by on Facebook, Twitter, or her website and say hello!
Facebook PAGE: http://www.facebook.com/authorDCStone
Facebook PROFILE: http://www.facebook.com/dc.stone.92
Twitter: http://twitter.com/DCStoneauthor
Website: www.authordcstone.com