Lynn Burke is visiting me today. Longing For Her was released last month, and I think the best saying to describe this wonderful story would be 'when opposites attract'. Only Cole and Gwen's attraction won't just guarantee for an interesting relationship, it could have a devastating affect on their loved ones.


About Lynn Burke:
Lynn Burke is a full time mother, voracious gardener, and scribbler of spicy romance stories. A country bumpkin turned Bay Stater, she enjoys her chowdah and Dunkin Donuts when not trying to escape the reality of city life.
Her current work, the Risso Family Novellas, revolves around four siblings from Boston’s North End. 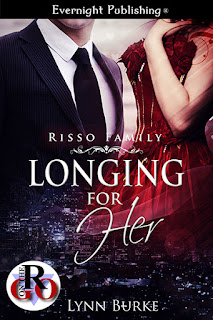 Straight-laced Cole Risso has longed for his sister’s bohemian best friend Gwen since he first laid eyes on her as a kid. Now, as future patriarch of the Risso Family, he’s expected to marry well. A free spirit and unconventional daughter of a pot-toking hippie hardly qualifies.


When one night of giving into temptation ruins them both for any other, Cole and Gwen are faced with a decision - love the other enough to let them go, or defy family expectations and fight for their hearts’ desires.  No matter the decision, their choices have the power to destroy all they hold dear.

Excerpt:
I rounded the couch, but halted as a body came into view.


Cole lounged against the far side, one hand behind his head, half-empty beer bottle in the other. “Hey.”


Our gazes collided, sending a shock wave of energy through my blood. My heel itched to spin, but his focus wandered down my body and back up again, lingering on my bare thighs.


Oh, the temptation to taste him one more time. Three years of simmering desire had my kettle ready to scream hallelujah. “Hey,” I whispered back. “I thought you’d left.”


His smile melted my bones. “Decided to stay a while and reminisce.”


My lips tugged up. “I was eyeing the back of the couch while stealing some whiskey and doing the same thing.” Kind of.


I considered the cushion closest to me and bit on the inside of my lip as temptation and love for the sexy man a few paces away warred in my brain. Knowing I owed Cole an apology, I decided to sit, curling my legs under me. “Sorry for being so harsh earlier. I…I didn’t mean to hurt you.”


Cole twisted sideways to place the bottle on the coffee table. “I shouldn’t have cornered you like that.” He started to sit up, but hesitated, a question in his eyes.


The leather squeaked as he swung his feet to the floor and leaned back, hands on his thighs. His blue tie hung loose, the top two buttons of his dress shirt unbuttoned. A hint of dark hair called out to my fingers. Averting my eyes, I focused on the tumbler clasped in both my hands.


“I know I’ve said it hundreds of times, Gwen, but I’m sorry. Please say you forgive me.”


Another gulp of whiskey gave me courage to speak. “Forgiving in my mind means making things right—getting back to normal and moving on.” I lifted my head enough to focus on the knot of his tie. “I can’t do that with you, Cole.”


“Because even though it’s expected you’ll marry an uptight, snobbish princess,” I sucked in air and allowed the words to spew, “I want you every second of the day.”


His chest stopped its rise and fall, and I glanced up at his face.


Longing like I’d never known reached out from his eyes and froze me in place. My breath caught. Nipples pebbled beneath my thin shirt.


Every muscle in my body quivered as he stood and walked toward me, unwavering gaze on my face.


“What—” I licked my lips, hating how my voice wavered. “What are you doing?”


My pulse thrummed with life, and I put the glass in his outstretched hand.


He set it on the coffee table without breaking eye contact and leaned down, placing his hands against the back of the couch on either side of me, making an effective cage. His face hovered mere inches from mine.


I breathed in as he exhaled, the subtle scent of peppermint flooding my mouth with saliva. His lower lip called out to my teeth; the shadow lining his jaw begged for my tongue.


“Did you mean what you said about once being enough, Gwen? Because it’s not for me. I want to taste every inch of your skin. Bury myself inside you.”


My breath caught, and moisture flooded my panties making me squirm on the cushion.


I opened my mouth, having no idea what words would tumble out, but he swooped down, capturing my parted lips before I could speak.