Someone special has dropped by today to share a little about her latest book. Seduced by Two Warriors is the fourth book in Ravenna Tate's Voyeur Moon series. I dare you to be afraid of being abducted by aliens after reading this series. 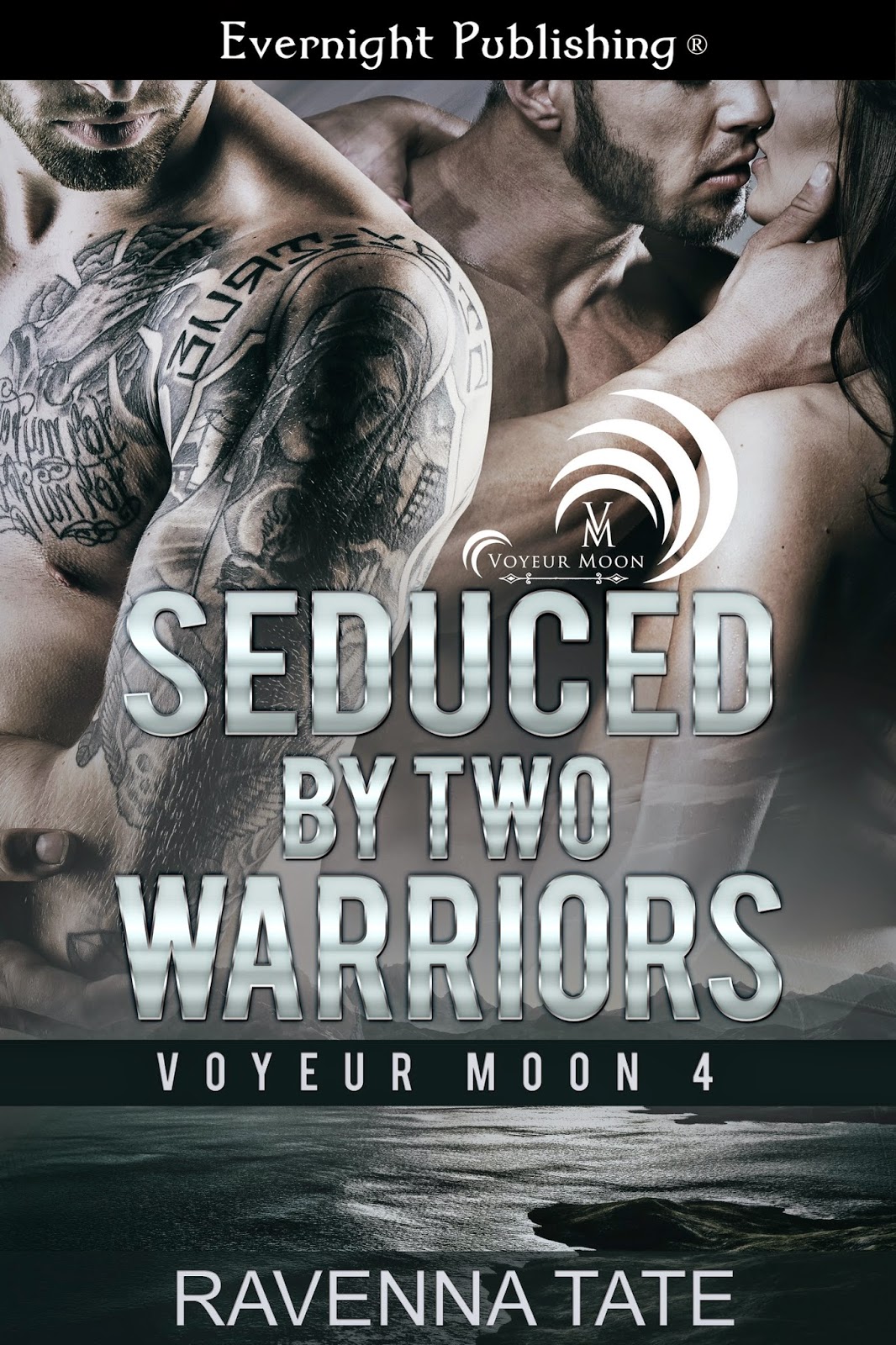 
Gia Falconetti was taken by the Tyranns in the first wave of invasions on Earth, and sent to the holding cells. But she was lucky. She got away from the men who had taken her as their sex slave. When the opportunity comes to work in the Ministry on Sera, writing down her experiences for the people of both Sera and Addo, she jumps at the chance to help others understand what is truly happening on Voyeur Moon.


Addonian warriors Thane and Rune have come to work in the same department as consultants. They fall hard for Gia, but she has demons that might prove too much for the men to help her overcome. When Thane and Rune go along on the mission to rid Voyeur Moon of the Tyranns forever, their most fervent wish is to return to Gia, the woman they have grown to love.


Rune lay next to her, brushing his fingers up and down her arms, slowly, sending tiny jolts of electricity straight to her clit. It throbbed now, and her pussy was soaked. Happy thoughts filled her head as Thane’s tongue circled her breasts through her top and camisole. Thoughts of Earth, and her life back home, and times when sex was fun and she looked forward to it.


He brushed his fingertips over her nipples, hardening them to the point of pain. She moaned loudly as he rolled the hem of her top upward. When Rune moved to her legs, she writhed against his touch. His hands were on her thighs, teasing, moving her legs apart gently. She let him, spreading them herself after a moment.


They all wore jeans here, which would have made her laugh if not for the fact that they’d basically stolen them from Earth after the invasion. But now, she was almost grateful for the fact that she’d changed into a pair instead of staying in the skirt she’d worn to work, because the heavy fabric would mask her wetness for a while longer. She shouldn’t be embarrassed that they aroused her this way, and she wasn’t entirely sure why she didn’t want them to know. They would want this for her. To know they could do this to her.


Thane kissed her breasts through her clothes, and she let out a loud groan then pushed his head closer, wanting more. When he pulled off her top, he watched her face carefully, as if unsure whether to keep going.


He pushed down her camisole straps, then pulled the fabric down further, exposing her breasts. “You’re beautiful, Gia.” He kissed both everywhere but on the nipples, holding them in his big, strong hands as if they were fine china and might break.


She whimpered and panted, sure she’d go out of her mind with desire. Between her legs, Rune rubbed his palm over her pussy and clit, and that forced loud moans from her. She was close to an orgasm. She hadn’t had one in so long she wasn’t sure she’d need to be touched directly on her clit to make it happen.


Thane removed her camisole at the same time Rune slid down her jeans and panties. He removed her shoes, and then she was naked with both men. Rune sat back on his heels and gazed at her with nothing short of awe in his beautiful eyes. “Wow.”


His brother sat up and let his gaze travel over her body. “Yeah. What he said. You’re stunning. Truly.”


She couldn’t hold back the tears now. “So are you. Both of you. Thank you for this. For everything. For being so gentle and patient, and for helping me get here, to this point.”


Rune shook his head. “Oh, Gia. I wish we could take it all away for you.”


“You are. You’re replacing it. Please don’t stop.”


Rune kissed her abdomen, and then he trailed his tongue over both thighs, up and down, until Gia could do nothing but moan. Thane took her breasts in his hands and licked her nipples, sending electricity once again straight to her pussy. When he began to gently suck and bite them, she cried out in pleasure.


Between her legs, Rune brushed his fingers over her wet pussy, and then he bent his head to lick her and suck her clit.
Posted by Unknown at 00:01