Extra! Extra! Read all about it!

April Zyon has dropped in to share with us her latest book. It's so fresh, it's due out today. All in the Timing is the seventh in her Massey, Texas series. 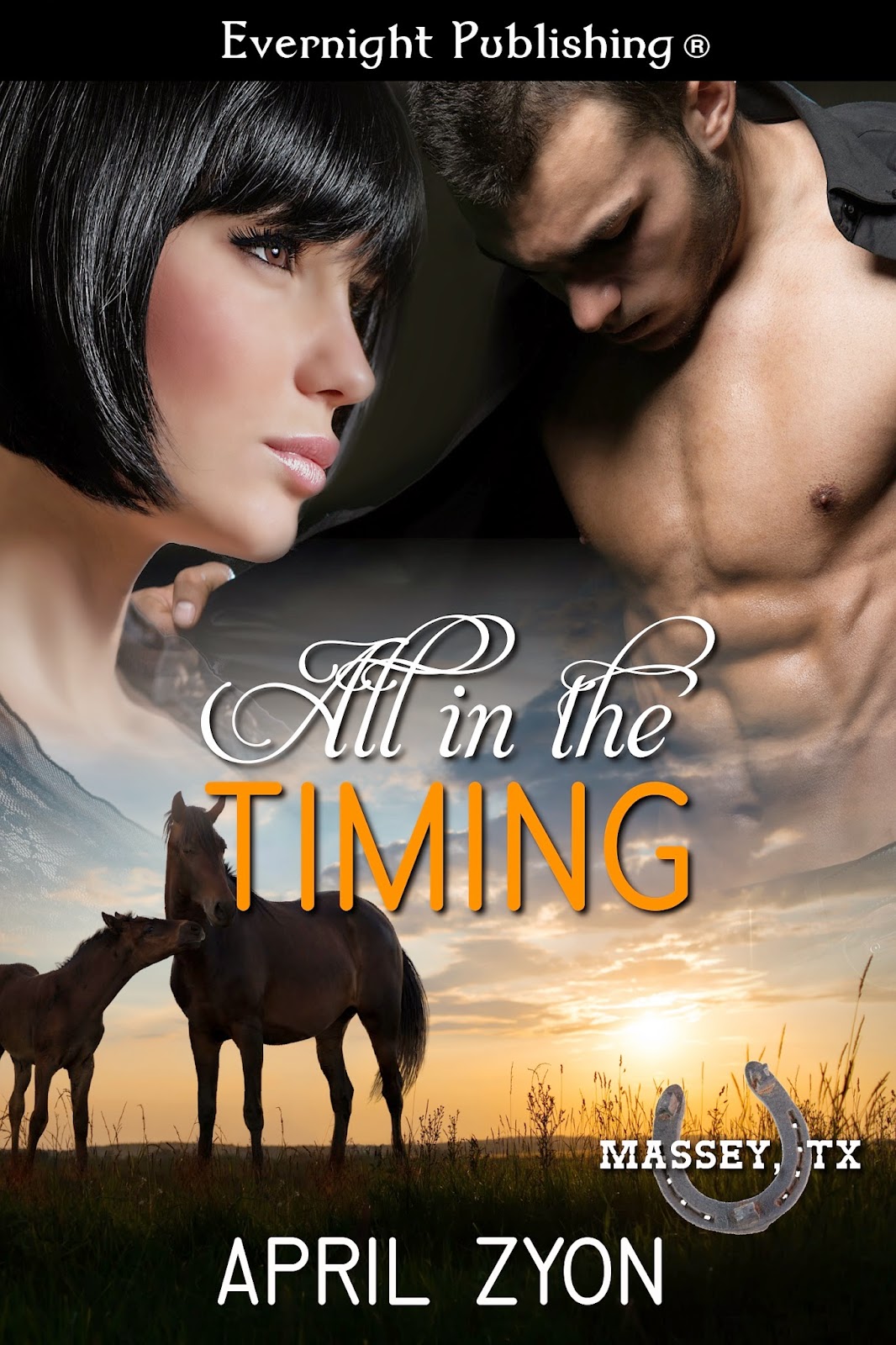 Blurb
Rebuilding her life was never in Elizabeth Davidson’s plans, but things rarely go according to plan. At least she had Massey, TX to call home when she needed a place to tuck herself away from one mistake after another. What she hadn’t planned on was becoming embroiled in the middle of a multi-agency case. Or becoming one of the victims.


Frank Carver, Jr. loves Massey, TX. It’s the place of his birth, and will always be the place he considers home. Because of the nature of the job he chose to do, and the people he’s come across during the years, he’s always been careful to never lead that danger back home. But when danger finds its way into the very heart of his town, he has no other choice but to return. Especially when Elizabeth, the only woman he could ever love ends up with a target on her back.

Excerpt:
“I’m sure that there is a woman out there that would take you, that wants you.” She did. God help Eli, but she wanted him desperately. She wanted him to be in her life, she wanted to have him, but was too afraid to tell him. “One day, she’s going to walk into your life and you will put the job behind you and stay around. I just know it.”
His gaze clashed with hers, and held. For long moments, it felt like he was peeling away the layers, seeing farther than anyone ever should. “Oh, of that I’m quite sure,” he said. “But she’ll have to wait a little longer. I have one, maybe two more very important things I need to attend to before she’ll have my full attention. If she’s even ready for it, of course.”


Eli felt her heart fall, but she nodded, plastered on a fake smile, and pulled her hand back from him. So he already knew who it was that he wanted. Of course he did. He was an amazing man and would of course already know who he wanted to be with. “I’m sure that she would be ready. She will wait for you. You are worth it, Frank.” She would wait forever for him, and that was just plain sad. Right, so since he knew who he wanted, that meant she really did need to get on with her life. “Finish eating,” she said simply, and picked up her chicken leg.


He didn’t look away, though, his gaze steady on her long enough to start to unnerve her. Then, shockingly, his lips curled into the smallest of grins. “She doesn’t even have the faintest clue, but she will,” he said. “Eventually, she’ll clue into the fact that I know exactly how she feels and will get with the program, I’m sure.” He finally looked away from her, and returned his attention to his plate.


Whoever it was, well, she was a very lucky woman indeed. She turned her focus back to her food and took her time eating. She had to admit, the food really was very good. It was better than she had anticipated, so that was good at least.


“You’re awfully quiet,” he said a time later. His plate was cleaned of everything but the chicken bones. “Something on your mind, Eli?” Frank was leaning back in his seat, his legs stretched out under the table, his entire posture extremely relaxed.


“Just trying to think of who this woman is that you have a thing for,” she blurted out, blushing as she realized that she really had said that aloud. “So, apple pie. You want some and ice cream? I have plain vanilla to go with the pie. Works better that way, I think.”


One of his eyebrows went up, and if she wasn’t completely mistaken, he appeared to be fighting a grin. “Never liked ice cream on my pie, dilutes the flavors, to my way of thinking. So I’ll just have a piece straight up, if you don’t mind. Any thoughts on who this mystery woman might be?”


“Not the first clue,” she admitted, and stood. “Will you clear the plates? I will get the pie if you will do that, please.” She would box up the leftovers and ensure that Frank was able to take that out to the guys. “So just plain apple pie, I can do that.”


His heat was the first thing she felt along her spine. He put his hands on the counter on either side of her, effectively trapping her. “Think on it for a while, Eli. I’m sure you can figure it out. You’re a wonderfully brilliant woman, after all. I’ll even give you a clue if you think it will help.”


“All right,” he said. Tipping his head slightly, he appeared to think for a moment. “She’s amazing, fierce in her own way, and pretty much thinks she’s the last person on the planet who would garner attention from me. And as a bonus clue…” He looked her dead in the eye again. “She’s the only person who I’d climb over my family to get to.” Tapping the end of her nose, he turned and went to the table to begin gathering up the dishes and food.


She just looked at him. She couldn’t stop staring. She was missing something and felt incredibly stupid at that moment. “Me?” She gasped finally, realizing exactly who he was talking about. “Frank.” She moved and reached out to grab his arm. “Are you talking about me?”