This Christmas eve, we have a special present for you. Clare Dargin's latest book is due out today, and she has popped into tell you all about it.

Firstly, let me share a little about her before you get a peek of the book. Clare is an author of Science Fiction and Romance and has been writing stories all of her life before being published in 2007. She’s a great fan of the two genres and loves promoting them.
An educator by profession, she possesses a Bachelor’s Degree in English from a major mid-western university. She presently resides in the Midwest and she hopes to expand her writings to include non-fiction, historical romance, and contemporary novels.


This title is offered at a 10% discount. Offer ends midnight CST, December 31st 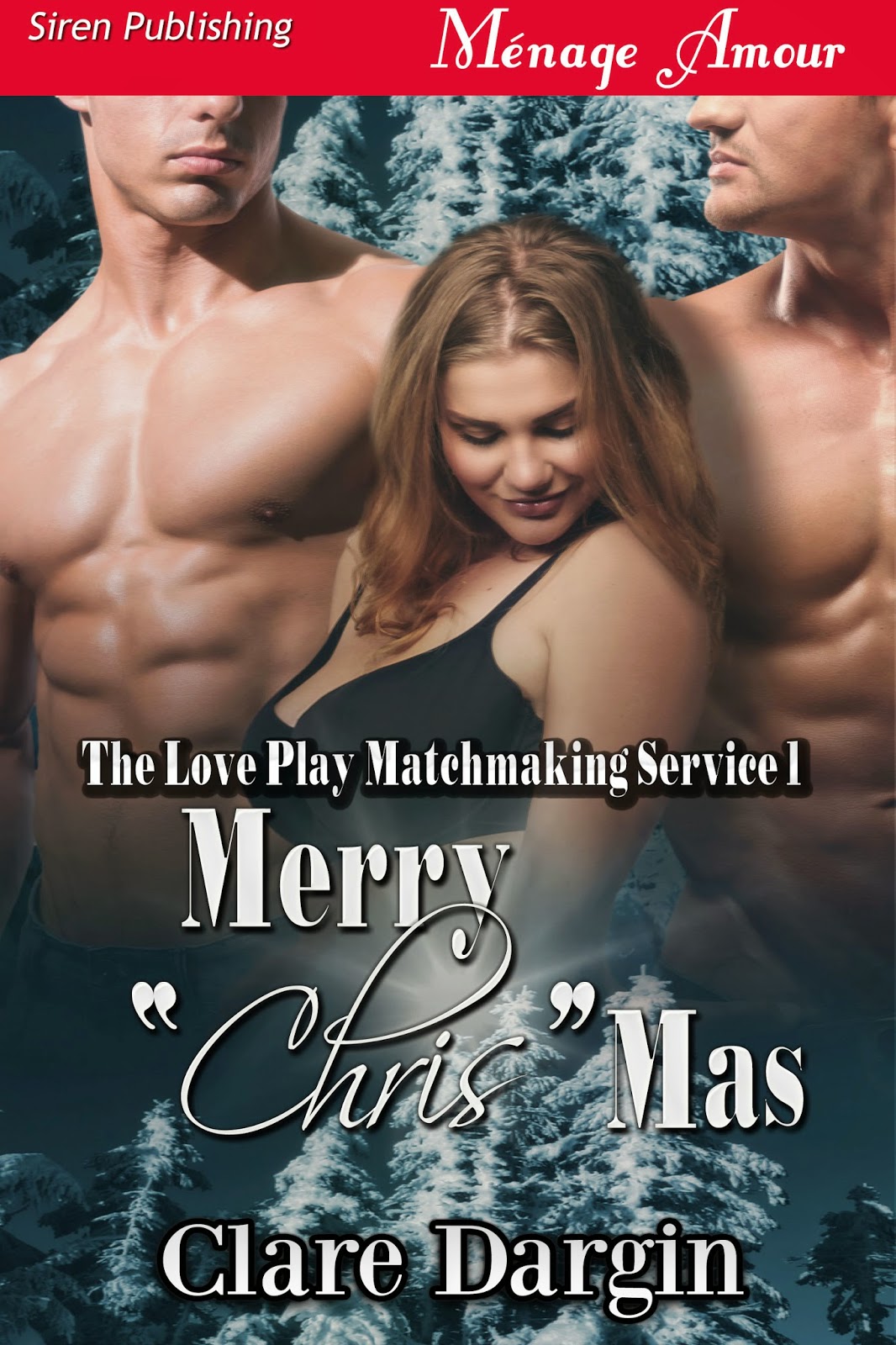 
Jilly Reimers wants love but can't find it. Chris Spinell is a veteran of the war in Afghanistan who suffers from PTSD and a haunting feeling that something is missing in his life. Chris Poole is also an Afghanistan war veteran is ready to break out of his shell but is unsure how.
With Christmas just around the corner, they decide not to spend it alone. Believing The Love Play Matchmaking Service to be just what they need for a night of fun and passion, they sign up. But when the guys show up and see that they've been set up on a ménage, the only one happy about it is Jilly.
Their consultant, called an Eros, assures Jilly that the service has a perfect track record but she's certain they'll be the first ones to get their money back. Will they have a very merry Christmas? Or will the three spend yet another one alone?


Story Excerpt
Jilly idly twirled a lock of her hair as she gazed at the fire. The meal was good, a bit awkward, but all right. Now with Chris S. in the shower, she and Chris P., who’d freshened up after her, sat beside her. She hoped she’d get a chance to know him a little better, now that they were alone.
Unlike Chris S., Chris P. was quiet, more reserved. His warm smile could melt ice. They’d spoken a bit about his life in Australia and how he met the other Chris when they were on Diego Garcia, a tiny atoll in the Pacific. It was there he garnered a better perspective on life, friendships and love. She reasoned that war tended to do that to a person.
She looked at him again, admiring what she saw. He was gorgeous. If only she were a femme fatale like her friends. She pictured grabbing him by the scruff of his collar and planting a long seductive kiss on his pouty lips. Anything to ease the tension between her legs and the moisture dripping from her swollen pussy.
Golden and sun-kissed like a surfer, he had a look impossible to have around this time of year in Michigan, unless he spent countless hours in a tanning booth. But at the same time he didn’t look like the type who’d go to one. He seemed too rugged. She glanced at his short, flaxen hair, which he wore pulled back in a stubby tail. It accentuated his keen facial features. His physique, like that of a gladiator, made her want to whimper. Built like a brick wall without being too thick, he was three words—supple, etched, steel. And his Australian accent added to his raw sexiness.
Whereas Chris S. was the perfect picture type of the all-American, boy-next-door type, with light brown hair and sandy-colored tips and eyes so blue they looked like the color of tropical water. He reminded her of the high school captain of the football team who’d gone into the military and become a man, except he had a sensitive edge that permeated his being. While Chris P., who looked like he could take on a few guys at once, was more lighthearted and outgoing.
Either way, she knew she hit the jackpot because both guys were like something out of a magazine called Hot Guys “R” Us. They were a perfect ten. It was best Christmas gift anyone could have ever given her. She hoped a Chris Sandwich was definitely on the menu for the night. But how to get past the talking stage, she had no clue. She wondered if all of her Love Play’s match ups started like this.
Wearing some leggings and a cami, and he a T-shirt and shorts, she suddenly felt overdressed. The art of seduction was not something they taught in any of the schools she’d attended, and she sure as hell never picked up any pointers from her so-called “friends.” And her exes never gave her any encouragement in that department either.
This date should have come with instructions. I think I’m in trouble.
She let out a long sigh.
“Did you say something?” Chris P. asked, stirring from his long silence.
“I was just thinking how beautiful this place is,” she lied. What? How lame is that?
“It is. I’ve never been to a place quite like this.”
“Love Play has quite a reputation.”
“You’ve used it before?” He perked up, facing her.
Heat burned her cheeks. “No. It’s what I heard from some of their clients.”
“So have you been married?” he asked.
“No.”
“Neither have I. Never found anyone to get serious with,” he said, shrugging. “I don’t know. Maybe cupid’s arrow doesn’t work on me.”
“For me they’re defective. Or maybe his aim is bad,” she said, trying to suppress the memory of her ex-boyfriend.
“What do you mean?”
“My relationships, they never work out.” She shrugged her shoulders. “For whatever reason, they seem to choose my friends over me. Or it ends up that way once we get together.”
He shook his head. “Nah. They were bad blokes from the start. Believe me. I know. I’ve been around those types my entire life. The randier they are, the worse they will be. If a man wants you, he’ll stay.” His tone was soft, almost vulnerable.
“Maybe.”
“So tell me,” he said, turning to face her, “you ordered this hook up?”
Again, her face flushed. She imagined it turning its characteristic red when the blood rushed to her cheeks.
“Yes. But according to the guidelines, you would have either had to be open to it or requested it too. Right?”
He chuckled. “I see he also got the smart I asked for. Yes, I am open to a ménage.” His expression became serious. “Do you think me odd?”
“No. I’m glad we share that desire.”
Adult Excerpt
Buy Link-- http://www.bookstrand.com/merry-chris-mas
﻿
﻿
Posted by Unknown at 00:01